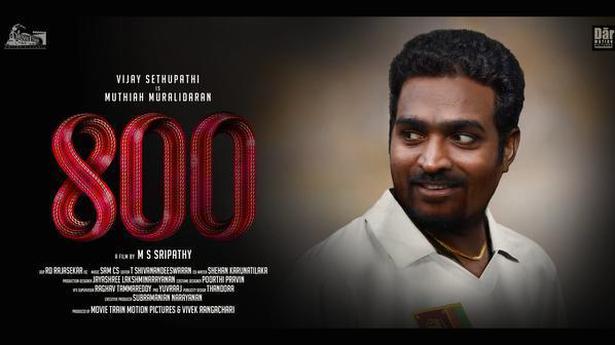 The Kollywood actor and Sri Lankan cricketing legend got together on a virtual chat to discuss the movie recently, during the ongoing IPL telecast

The motion poster and first look of Vijay Sethupathi as cricketer Muttiah Muralitharan from the upcoming biopic 800, is out. The film will be directed by M.S. Sripathy.

The Kollywood actor and Sri Lankan cricketing legend also got together on a virtual chat to discuss the movie recently, during the ongoing IPL telecast, before the first look was revealed.

The film is produced by Movie Train Motion Picture & Dar Pictures. Composer Sam CS and cinematographer RD Rajasekar are also on board.

According to the official synopsis, 800 is a fast-paced and funny biopic, and will be a moving portrayal of one of cricket’s most brilliant and divisive characters, and a tale of ethnicity and pride. The film will be shot in Sri Lanka, U.K, Australia, and India. The shoot will start at the beginning of 2021 and the movie is set to release at the end of 2021.

The film will be made primarily in Tamil, and will also be dubbed in all South Indian languages, as well as Hindi, Bengali, and Sinhalese. An international version with English subtitles is also being planned.