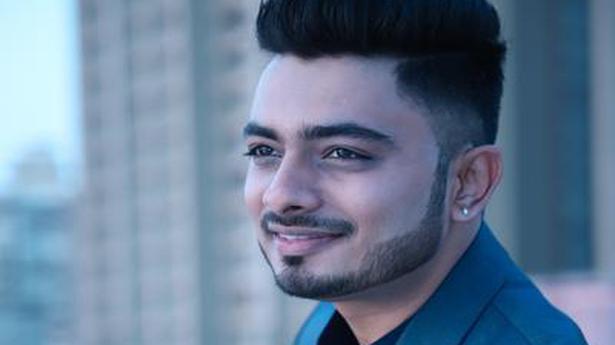 At ease with both film and independent music, Abhay Jodhpurkar talks about collaborating with composer Jeet Gannguli for ‘Ae Mere Dil’

‘Ae mere dil’, an independent music video with the song composed by Jeet Gannguli and sung by Abhay Jodhpurkar, crossed a million views on YouTube within a few hours of its launch last week. The music video, produced by VYRL Originals, features Shaheer Sheikh and Tejasswi Prakash and is the first collaboration between Abhay and Jeet.

Abhay had sung a Tamil version of the composer’s popular Hindi track ‘Muskurane ki wajah’ from the film City Lights, which had caught the latter’s attention: “He liked my rendition and much later, I got to work with him for ‘Ae Mere Dil’,” says Abhay.

The love ballad addresses relationship turmoil and Abhay says he was moved to tears by Manoj Muntashir’s lyrics: “It’s beautifully written and brought back memories. Anyone who has been through heartbreaks will relate to this song which spells hope.”

Romantic melodies have become Abhay’s forte, since ‘Moongil Thottam’ from Kadal (Tamil). There were other groovy, foot-tapping hits like ‘Helana…’ (Iru Mugan, Tamil), but romantic melodies became his trump card. There was ‘Itu itu…’ (Kanche, Telugu) and later his first Hindi film soundtrack ‘Mera naam tu’ (Zero): “Melodies have a long shelf life and I am happy I got to sing these songs. I am sensitive by nature and can cry at the drop of a hat; I am happy to have been typecast in this segment, though I have tried out various songs. In fact, I remember AR Rahman mentioning in an interview that there was something spiritual about my voice. I take it as a huge compliment,” says Abhay.

On his YouTube channel, one can listen to his cover versions of all-time hits ‘Lag jaa gale’, ‘Yeh haseen vadiyan’ and a medley tribute to Mohammed Rafi: “I love the golden age of Hindi film music and the cover versions are my tribute to the legends. When I choose a song for cover rendition, I don’t think of how many views it will get; I select songs that I love listening to.”

Stepping out of his comfort zone, he also tried an acapella rendition of ‘Cherathukal’ from Kumbalangi Nights (Malayalam), accompanied by Keshav Ram. “I loved ‘Cherathukal’ and have heard it repeatedly. We had fun working on the acapella version,” he says.

Those who have followed Abhay’s musical journey might be aware that the Indore-born singer pursued Engineering in Chennai, learnt music at KM Music Conservatory and is a protégée of AR Rahman. The college years in Chennai helped him learn to speak in Tamil, and he got familiar with Telugu and Kannada during his initial years as a singer.

He admits that Malayalam was tougher. He remembers recording one song for three days, struggling to learn the pronunciation, when he first recorded a Malayalam song.

A familiar voice in South Indian languages, Zero gave him a break in Hindi film music. Simultaneously, Abhay has been exploring the independent music space. He acknowledges the resurgence in independent music and says, “It’s a good time for original music; the OTT space is opening up and there’s a lot of scope to look beyond the norm.”

Reverting to talk about ‘Ae Mere Dil’, Abhay says the collaboration with the composer, lyricist and the creative team happened over Zoom meetings: “It was rejuvenating to share ideas; music kept us going during the lockdown. The virtual collaboration was rather smooth.”

Next, he looks forward to the Tamil version of A R Rahman’s 99 Songs for which he has sung, and has a few other projects lined up.

Photos: Mouni Roy turns heads with her stylish look as she...