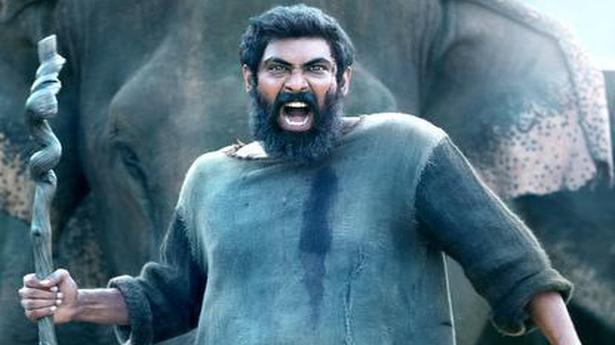 Imagine a boardroom full of powerful men, drawing up plans to build a sprawling, plush township surrounded by verdant greens. The irony is, they aim to do this by encroaching on a reserve forest zone. Director Prabhu Solomon’s trilingual film (Aranya in Telugu, Kaadan in Tamil and Haathi Mere Saathi in Hindi) is a relevant tale that has the potential to resonate with similar threats to ecologically sensitive zones in different parts of the country.

The film is also an indirect hat tip to Jadav Payeng, considered the Forest Man of India. Like Payeng, the on-screen jungle man is credited to have planted several thousand trees. Barring that similarity, the protagonist’s journey here is a fictional one. His real name, Narendra Bhupathi, is mentioned fleetingly. He’s better addressed as Aranya (Kaadan in Tamil). Having grown up in the lap of nature, he understands every call of a bird or animal and his conversations with the flora and fauna are fun.

The jungles are familiar terrain to Solomon. His earlier film Kumki (Gajaraju in Telugu) was a heartwarming story of a bond between a man and an elephant. The opening scenes of Aranya are in a similar space, drawing us into the dense forests and their many sights and sounds. Ashok Kumar’s camera and the sound design by Resul Pookutty set the stage for a visual and aural delight.

Solomon draws the battle lines between Aranya and the vested forces without wasting time. A minister (Ananth Mahadevan), a real estate firm and their many subordinates want to invade a reserve forest zone. Elephants are at the risk of losing their access to their most fundamental need — water. The forester will have none of it.

For a battle that’s so clear cut, the happenings are long drawn. Some things work — like the characterisation of the jungle man. Rana plays the rugged forester, owning the peculiar gait and looking believable even in a gravity-defying Tarzan-like sequence. There’s an interesting history to this character. He’s no ordinary, poor man of the forest. His family has always lived in sync with nature and put ecology above everything else.

The portions where his unique traits are used against him are well played out. However, the film loses momentum quickly, embarking on a lopsided narrative of one man against all the hammy antagonists who bay for the elephants’ blood.

Sure, there’s the Naxal woman (Zoya Hussain) and reporter Arundhati (Shriya Pilgaonkar) who want the jungle to be protected, but their roles are limited.

The film has its moments. You can guess when an elephant will come in harm’s way and yet, when it happens, it shakes you up. When a herd of elephants go in search of water, it’s a desperate call for survival. One of the scenes from the final moments, which befits the Hindi title Haathi Mere Saathi, is equally moving.

But there are several loose ends. The subplot of romance between the partly-silly-partly-corrupt mahout Singha (Vishnu Vishal) and Zoya’s character is done away with after a point. A lone official who helps initially is nowhere in the picture later. A few characters that stay on, aren’t even made to do the most predictable things. Why does it take that long for an independent journalist to harness the power of social media?

Rana singularly tries to hold things together, trying to save the elephants as well as the film. He is all heart when he tries to win back the trust of the elephants. Shriya and Zoya are good, but there’s not much they can do with their under-developed characters.

There’s a dialogue where Rana says that animals know where to look for food and water according to the season, human beings don’t. The giants are superior creatures, and their cause deserved a better film.