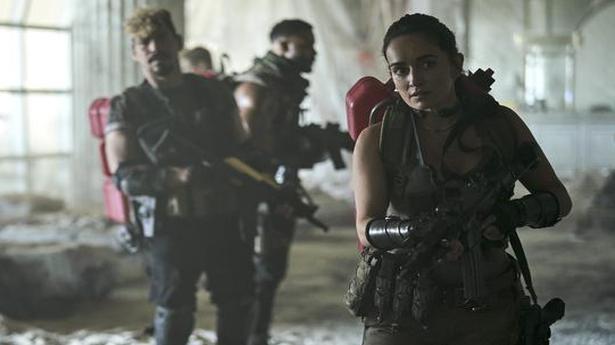 Netflix horror-thriller delivers an overdose of explosions, decapitations, gouts of blood and even a zombie tiger to ensure an enjoyable popcorn outing

There are certain things you expect in a Zack Snyder film: slo-mo shots, gouts of gore that splatter the frames crimson, remixes of songs of a certain vintage and loads of style. Army of the Dead delivers all this in spades. Snyder, who made his feature debut with a successful reimagining of George A. Romero’s iconic Dawn of the Dead (1978) in 2004, returns to zombies to deliver a thrilling heist/zombie/post-apocalyptic/estranged father-daughter reunion tale. That is the size and scope of the Synder buffet.

Also read | Get ‘First Day First Show’, our weekly newsletter from the world of cinema, in your inbox. You can subscribe for free here

To up the danger quotient in Dawn of the Dead, Snyder made the zombies move quickly, instead of their usual mindless shuffle. In Army of the Dead, Snyder has created a sentient zombie, which might offend the purists (including yours truly), but then he has also given us Valentine, a zombie tiger, which goes a fair way in forgiving the liberties taken with the canon.

Las Vegas is infested with zombies and after the military fails to rid sin city of its undead hoards, a tactical nuclear strike is ordered. Tanaka (Hiroyuki Sanada) wants a mercenary, Scott Ward, (Dave Bautista) to assemble a team and get out 200 million dollars from his casino vault before the city is razed to the ground.

Army of the Dead

Ward’s estranged daughter, Kate (Ella Purnell) works in a quarantine camp outside the city. When Ward asks her help to enter the city, she introduces him to Lily, (Nora Arnezeder) who takes people into the city for a fee. Kate joins the team when she realises her friend, Geeta, (Huma Qureshi) a single mom, has not returned from the city. A slimy security guard, Cummings, (Theo Rossi) and the casino’s head of security, Martin, (Garret Dillahunt) are also part of the team.

The plan, like all such plans, seem simple enough on paper, but then as is the nature of such things, rapidly goes south with the alpha zombie Zeus (Richard Cetrone) and his bride (Athena Perample) throwing spanners in the heist and the nuclear strike being brought forward so instead of a 36-hour window, the team have barely 90 minutes to crack the safe, get the money and run. There are as usual traitors in the mix with disparate agenda.

Read More | Interview: Zack Snyder and Dave Bautista on ‘Army of the Dead’

Even at 148 minutes, there is never a dull moment in Army of the Dead with explosions, bursting heads, decapitations, gouts of blood and Valentine slinking around swishing its zombiefied tail or yawning and curling up on a beat-up car. One doesn’t have to bother too much with the acting in an action movie and everyone snarls out their lines competently. Special mention should be made of Tig Notaro’s chopper pilot, who is a charismatic hotshot.

And then there is the music. There was Led Zeppelin’s hypnotic ‘When the Levee Breaks’ in Snyder’s Sucker Punch and My Chemical Romance’s incendiary rendition of Bob Dylan’s ‘Desolation Row’ in Watchmen. Army of the Dead features lovely covers of CCR’s ‘Bad Moon Rising’ and The Doors’ ‘The End’ and an acoustic version of The Cranberries’ ‘Zombie’ (duh).

While the temperature guns and quarantine zones are disquieting reminders of the real world, Army of the Dead has enough popcorn thrills to take one out of the dark spaces that one’s minds and hearts are wont to wander into during these troubling times.

Army of the Dead is streaming on Netflix from May 21