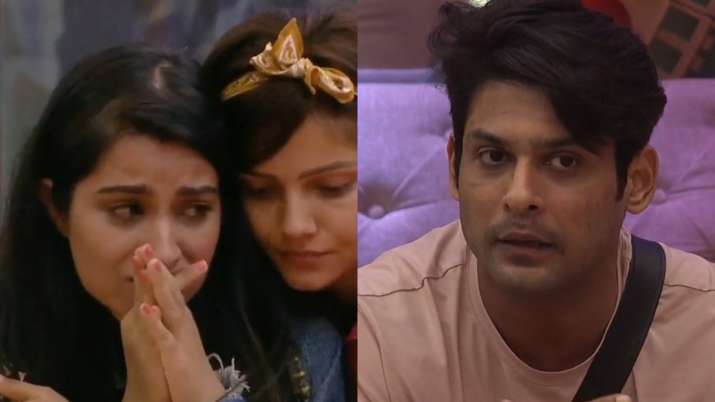 Bigg Boss 14 contestant Sara Gurpal was the first one to experience eviction on Monday night. The last night’s episode had Sara breaking down after the “Toofani Seniors” Sidharth Shukla, Hina Khan and Gauahar Khan decided to let her go after the first nominations process. With just one vote against her, Sara found her herself nominated for the week and Bigg Boss asked the seniors to take the decision. While Hina and Gauahar wanted to evict Rahul Vaidya or Nishant Singh Malkhani, it was BB13 winner Sidharth Shukla who found the spark missing from Sara and eventually she made her way out of the house.

Soon after her eviction, Twitter was flooded with reactions. while many called it unfair including Bigg Boss 14 housemate Rubina Dilaik, others found it a logical decision made by Sidharth Shukla. Twitterati claimed that eviction power should have been left with the viewers rather than the seniors. Many also questioned the biasedness towards Sidharth. One Twitter user wrote, “#BiggBoss still moving on its way of biasedness. Muje to lgta hai k sab nikal jayen gy or is bar ki trophy b yeh apny damad ko he deyn gy …It’s totally unfair eviction of #saragurupal”

Another tweet read, “Only #SidharthShuka wanted #SaraGurupal to go other two #GauharKhan and #HinaKhan didn’t want her to go  But these two ladies are so spineless …They don’t have guts to stand against Shukla” Check out the reactions here-

And Why they think its seniors decision and audience voting se bhi they will not evict #saragurupal ??? Makers ko usi ko evict krna tha ..senior are just doing what makers are asking to do.

The reason Siddharth gave for Sara’s eviction doesn’t make sense. I hope Bigg Boss keep Sara in a secret room and bring her back. She doesn’t deserve to go.@BiggBoss #saragurupal #BringSaraBack

Not fair
Sara is strong she cut her hairs also done task throw nikki makeup without thinking anything.
Sara is better than boys nd one thing this eviction is by senior not public.#saragurupal #SaraGurpal #BiggBoss2020 #BiggBoss14
We watch bb for new people not to see senior

On the other hand, there were people who lauded Sidharth for standing up for his opinions and making sure he gets the work done. In Sidharth’s defense, the actor said that Sara Gurpal failed to showcase her true personality in the first week and was least deserving of the lot. A Twitter user appreciating Sidharth said, “When salman called her (Sara Gurpal) spectator then they had no issue but #SidharthShukIa found her most non deserving contestant on the same basis ,all of sudden they have became her fans”

When salman called her spectator then they had no issue but #SidharthShukIa found her most non deserving contestant on the same basis ,all of sudden they have became her fans 😂😂

On a related note, soon after Sara Gurpal entered the Bigg Boss house, her name was surrounded by a controversy. Punjabi singer Punjabi Singer Tushar Kumar had produced a marriage certificate claiming he and Sara have been married. “I got married on 16th August 2014 in Jalandhar, Punjab India,” Tushar declared, speaking to IANS. Incidentally, the woman Tushar got married to is mentioned as identified as Rachna Devi in the marriage certificate, though he produces several photographs featuring the two, where Sara is seen sporting vermilion and the traditional red and white bangles as they pose together.

On why he is opening up on the marriage now, he claimed: “I was getting messages on Instagram and Whatsapp from people across the globe, while Sara is still claiming that she is not the one who got married to me, stating that the girl who married me just looks like Sara.”

He said Sara is lying about their relationship status. “I just want to prove that Sara is the one to whom I got married to and she is lying to the world saying she is still single,” he said. Tushar said Sara married him for fame. “I feel that she got married to me just to get fame and a citizenship of the USA. She left me because she didn’t get any publicity from my side,” he claimed.