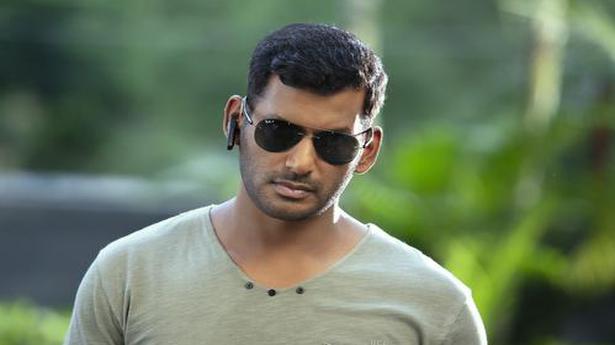 Arya might have acted in a film called ‘Naan Kadavul’, but this action-thriller starring Vishal would be a better fit for that title.

That’s because Vishal, an Army officer named Chandru, knows everything. He is stationed many miles away from Chennai, but when his grandmother does not answer his phone call one day, he suspects something is wrong and immediately flies down. He just knows it. When he gets curious about a multiple robbery case, he immediately — and conveniently — gets clues about the mastermind behind it. Chandru just knows.

But we still have a film to watch; this one starts off on Independence Day, when half the police force is away at various flag-hoisting functions, and a gang decides that it would be the perfect day to make a few quick bucks. They orchestrate a robbery in 49 households in Chennai, not far away from each other.

‘Chakra’ kickstarts in T-20 frenzy mode, with sirens and walkie-talkies blaring. Chennai has been robbed, and what will the cops do?

Nothing, it seems, because an Army officer named Chandru has to enter the scene to solve it. With the help of Gayathri (Shraddha Srinath, playing a cop), can he crack it?

‘Chakra’ positions itself as a cyber crime thriller. The absence of a major romantic track and songs is a huge relief, as is the character arc of the villain, but certain key emotional elements get in the way a tad too many times. Vishal looks fit enough to play an Army man, but ought to loosen up a little more and avoid the one too many ‘socially-conscious’ dialogues that have no connection with the story (the ATM sequence, released as part of the sneak peek, being one). Regina Cassandra picks a solid role, but could have pushed the bar higher in terms of performance.

Director Anandan seems to have taken off from where Vishal’s previous film, the successful ‘Irumbuthirai’, left. While that one had a strong villain and a handful of interesting scenes, ‘Chakra’ is content at throwing very little challenges at the protagonist who just seems to progress at breakneck speed because he just conveniently knows everything. The other issue is how the makers reveal certain technological aspects that have become a common feature in films today (voice-changer calling, for instance) like they were something radically new.

And the pity is that it is a great time to make a cyber crime genre film in Tamil cinema. Tackling the various nuances and loopholes in digital transactions provides enough fodder for strong content. Chakra, unfortunately, has very little of that.

Chakra is currently running in theatres

‘The Girl on the Train’ movie review: A supposed suspense-thriller with a lacklustre attitude

Taapsee Pannu and Anurag Kashyap’s properties being raided by the Income...

Happy Birthday, Shraddha Kapoor! Pictures that give us a glimpse of...