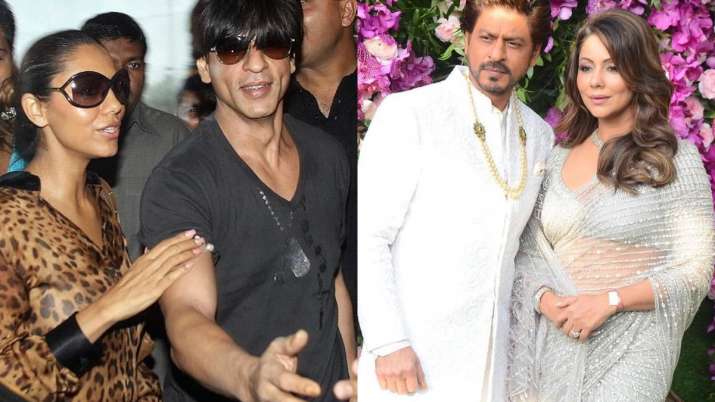 Bollywood’s King of Romance and his queen aka Shah Rukh Khan and Gauri are celebrating their 29th wedding anniversary today. A perfect example of a couple who stood by the test of time, SRK and his wife Gauri Khan got married on October 25 in 1991. Even though the superstar stays in the hearts of millions, there’s only one that is in his and the actor has on several occasions expressed his feelings. The actor once in an interview with a magazine said that if he ever had to make a choice between his wife and career, he would happily quit his work as Gauri is the only person he has. On the occasion of their anniversary, fans celebrated on social media by sharing throwback pictures of the two of them to pictures of their whole family. Not only this, but hashtag #29YearsOfSRKGauri became one of the top trends on Twitter.

Grab a look at how fans wished SRK and Gauri:

Wishing the power pair, an epitome of pure love @gaurikhan & @iamsrk a perfectly happy day. May God bless you both with forever togetherness and happiness.#29YearsOfSRKGauri pic.twitter.com/PmrnsJxjJK

Wishing very Happy Marriage Anniversary to My Shah nd his Queen Gauri Khan.. 29 Years complete of a great love story,, they didn’t find rich one but they both become the richest couple together, 29 Years of ShahGauri, love you both❤️🎂🎂😘😘 @iamsrk @gaurikhan #29YearsOfSRKGauri pic.twitter.com/0sh4iRmMaP

Falling in love is easy, but staying in love is something different. You did it. You are still doing it. 💗
We are wishing ‘Happy 29th Wedding Anniversary’ , to the wonderful couple Shah Rukh @iamsrk and Gauri Khan @gaurikhan 💞 #29YearsOfSRKGauri pic.twitter.com/hQW4mP4fWu

All our respect and admiration for this wonderful couple…because they have showen that confidence, respect and mutual support,can make the blessings of First Love Last Forever..!❤ @iamsrk @gaurikhan #29YearsOfSRKGauri pic.twitter.com/dgXlZdYSYz

I wish I can Reach At This Level of Love ❤🙏 #29YearsOfSRKGauri pic.twitter.com/1o0ij3WurR

Meanwhile, the family of five — SRK, Gauri, Aryan, Suhana and AbRam are nowadays in Dubai for the ongoing Indian Premier League and having a great celebration.

Kangana Ranaut reveals the most awful thing about being an actor...