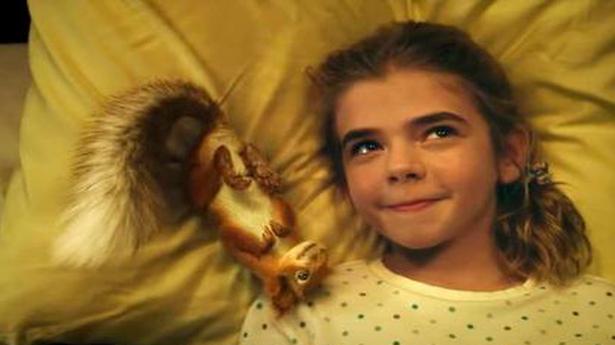 This delightful adaptation of ‘girl meets squirrel’ is backed by intelligent storytelling, a strong cast and a talented director in Lena Khan

Whenever I see a new movie or series centred around a child and an animal, I tend to roll my eyes and assume that the narrative will veer into the overly-chirpy kids’ genre of storytelling. But Disney’s latest feature film Flora & Ulysses, streaming on Disney+ Hostar Premium, actually flips that stale notion of mine on its head.

The film is a retelling of the eponymous book by Kate DiCamillo, with the script written by Brad Copeland. It sees Flora Buckman moving into a new neighbourhood with her mother Phyllis, post a tough separation. Amid this transition, Flora comes across a rather personable squirrel that acquired superhero-like abilities from a household appliance – yes, you read that right. A devout comic-book lover, she knows she is in for an adventure.

Matilda Lawler, playing Flora, leads a cast as well as any superhero would, she seems to charge into any scene, moving from emotion to emotion with a lot of smarts and plenty of nuance. A theatre-trained actor who’s been on Broadway, her characterisation of Flora made her all the more lovable, relatable whatever your age may be, and fluid. Lawler surely has a strength-to-strength career ahead of her, if Flora & Ulysses is anything to go by.

It takes quite a set of parents (and actors to play them) to parent a child as remarkable as Flora. It was a surprise seeing Ben Schwartz play a father here; we are used to him playing someone a little unusual but this marked an important transition for the actor who essayed the quirky and professionally desensitised father. Though a part of me was a little disappointed he did not have a sister played by Jenny Slate.

Alysson Hannigan as Phyllis is a big win for the film; Hannigan brings authenticity and pure love to her role as Flora’s mother. Flora & Ulysses has captured post-separation parenting well here, not just in terms of the child involved but also the parents’ individualities – again, without actively teaching. Each parent goes through a great deal of self-reflection and along the way, they discover that some work, while others do not. This is obviously catalysed by the introduction of Ulysses, whose unusual abilities bring both moving moments and dramatic relief. While some may feel Schwartz and Hannigan may come across as never fully-immersed in their roles, I felt the unusualness came from the rawness of a family chasm.

Playing an adversary to Ulysses, is the militant animal control official Miller (Danny Pudi) who brings a lot of heart to his role, and there are times when you maybe empathising with him. After all, wouldn’t you be at your wit’s ends if the bane of your existence was an abnormally talented squirrel? He is softened by the affections of a zippy and giggle-inducing Rita (Kate Micucci) who has taken a liking to the focus-driven officer of furry law.

One character that may feel a little random is William Spiver, a British neighbour with a visual impairment. Something about the seemingly-forced scenes with William had me often wondering – perhaps from watching too much Pretty Little Liars – if the young boy Flora befriends rather quickly is the ‘actual villain.’ As for you guys, you will have to just watch and find out.

Treatment of a tricky issue such as separation within a family was sensitively done. The film bids a lofty farewell to the days of ‘dumbing down’ content and dialogue when anything is centred around a child. One such as Flora, who strives to ask questions and is a cynic, cannot thrive in such storytelling. While most films that feature divorce always feature a life lesson or, in some way, teach kids about how to perceive divorce, Flora & Ulysses approaches this with good measures of respect and hilarity.

Leading the pack of stars is Lena Khan – Disney’s perhaps-first female Muslim director – who showcases her strength in paving the way for a story that appeals to any generation. Khan creates a world of emotion across the gamut: sadness, confusion, understanding, love, laughter and more. While the world of Flora & Ulysses is colourfully entertaining as live-action meets various animation types, the story itself is heart-warming for even those who claim to have the hardest of hearts. Watch this on a good day, watch this on a bad day, and you’ll be smiling in no time.

‘Raya and the Last Dragon’ review: A bright, bubbly adventure

‘Chaos Walking’ review: The sound of a wasted opportunity

Sushant Singh Rajput case: What lies ahead for CBI investigation after...