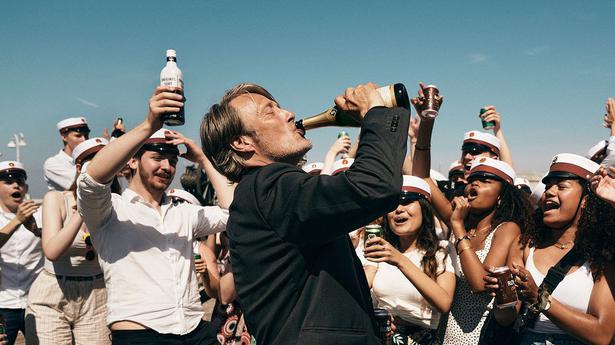 One of the year’s most moving, and funny films in the festival circuit happens to have four middle-aged friends who are drunk, to various levels, most of the time. Another Round, directed by Danish filmmaker Thomas Vinterberg, has been garnering praise from all over ever since it was screened at the Toronto International Film Festival.

At the 25th International Film Festival of Kerala (IFFK), it could be one of the crowd-pullers, since Vinterberg, whose past films have featured at the festival, is one of the favourites of the delegates here. Vinterberg, along with Lars Von Trier, was one of the creators of the Dogme 95 filmmaking movement, which stood for a pared down style of making, focusing more on the content rather than big budget technology and special effects. Another Round too somewhat matches that philosophy. Here, he once again teams up with Mads Mikkelsen, after their brilliant collaboration for The Hunt, which was screened at the 2013 edition of the festival. Those who are familiar with Mikkelsen only as a James Bond villain might be in for a surprise here.

The film has four school teachers, who are struggling and bored in their careers as well their personal lives. They decide to jazz up things by testing a scientist’s theory that controlled intake of alcohol through the day can improve productivity. Things do turn around, with students all suddenly paying attention to their uncharacteristically creative measures, and reigniting the missing zest in their daily lives. Things are rosy until they decide to increase the daily alcohol levels, one step at a time.

Though said to be a commentary on the drinking culture in Denmark, Vinterberg stays clear of any judgements, leaving it all to us. What he gets right here, thanks to the editing, is the rhythm and tone of the film, which seems to match the state of mind of the characters and the levels of alcohol in their bloods, swinging from the upbeat to the moody and languid. To get a perspective, one only needs to compare this to the Malayalam film Vellam, currently running in the theatres, which mostly progresses in the same rhythm, focusing on the ills of drinking.

The mostly upbeat mood of Another Round does not give one a clue on the personal tragedy that Vinterberg suffered in the death of his 19-year-old daughter Ida in a road accident, as soon as he began shooting for the film, in the high school where she studied. Yet, there is an underlying melancholy for things lost, if one were to look a little deeper.