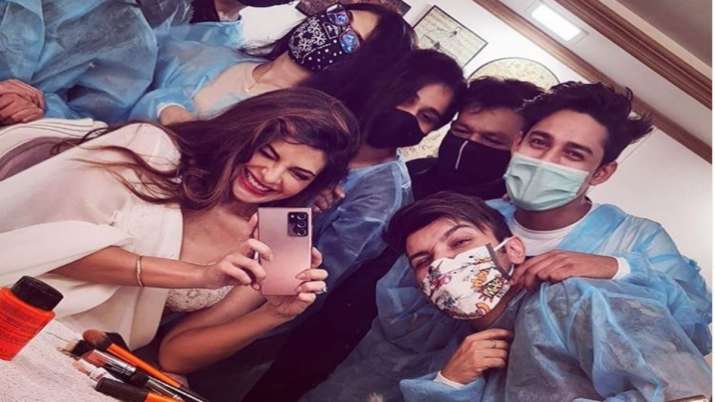 Actress Jacqueline Fernandez is back to work with all the excitement. She recently shared a happy picture of herself with her crew on social media.

Jacqueline took to her Instagram handle and posted a photo where she is seen happily posing with everyone in front of a mirror. Her crew was spotted in PPE kits and masks for precaution.

She captioned the image as, “I forgot shoot life was this fun! Grateful to be back”.

Jacqueline’s shooting was halted after a few of her crew members were diagnosed with COVID-19. Even she got herself tested for the virus but the reports came out to be negative.

However, while taking care of necessary precautions the actress is now back on sets and has resumed her shooting.

According to a source, a few days back the actress’ shoot was stalled abruptly after some crew members tested Covid-19 positive. Following necessary precautions, Jacqueline has finally resumed shooting for brands and commercials.

Recently, Jacqueline Fernandez posted a note on her Instagram handle giving out an important health update mentioning that two members from her shoot crew have been diagnosed with the deadly virus. However, fortunately, Jacqueline has tested negative for it. As a precautionary measure all the crew members who were involved in the brand shoot were tested for the same.

In her note she wrote, “Hello Everyone, We were beginning to adopt the new normal and getting back to work for a brand shoot and as a precautionary measure, the entire shoot crew was getting tested. I would like to inform you that two people from the shoot crew have unfortunately tested positive for COVID-19.”

Jacqueline was last seen in Netflix’s Mrs Serial Killer. And during the lockdown, she also appeared in a music video with Salman Khan which was shot in the latter’s farmhouse.

On the work front, Jacqueline will next be seen with Salman’s ‘Kick 2’. She has also signed ‘Bhoot Police’ alongside Saif Ali Khan and Arjun Kapoor.