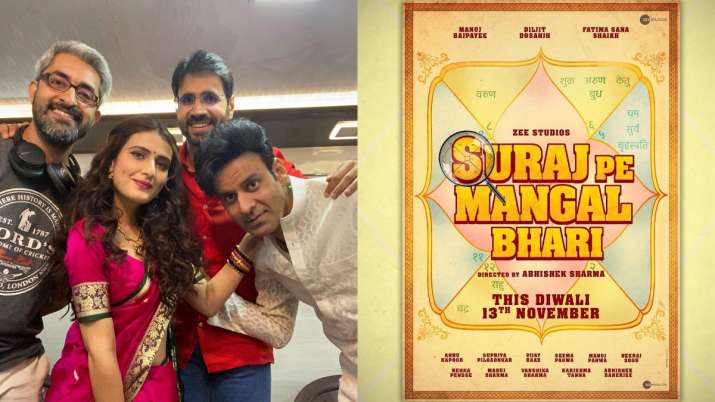 Actor Manoj Bajpayee, Diljit Dosanjh and Fatima Sana Shaikh are all set to come together in the upcoming family comedy titled Suraj Pe Mangal Bhari. The makers unveiled the first poster of the film and announced that it will release this Diwali on November 13. The poster shows the name of the film written with the backdrop of a traditional Indian horoscope and a magnifying glass. It appears that the film will have a connection with astrology. Fatima shared the poster and wrote, “Kripya apni कुंडली jaanch lein.शीघ्र ही aap sabhi ke जीवन main, Suraj ka प्रकोप aur Mangal ka प्रभाव badhne wala hai. #SurajPeMangalBhari, 13th November! Iss Diwali get ready for this dhamakedar family entertainer!”

Directed by Abhishek Sharma, Suraj Pe Mangal Bhari also stars, Manoj Pahwa, Annu Kapoor, Neeraj Sood, Manuj Sharma, Nehha Pendse, Abhishek Banerjee, Supriya Pilgaonkar, Vanshikha Sharma, Karishma Tanna and others. A source said: “Fatima did multiple readings with Abhishek Sharma and worked on her body language to mould herself in the role before the film went on floor. She has completely transformed herself for the film, the audiences will be in for a real treat!” The director revealed that Fatima’s character has a dual personality. He said, “Her character has a dual personality for which we needed an actor who could play vulnerable, mysterious and assertive with equal ease.”

From setting up a massive set in Film City recreating chawls of Mumbai to exquisite, old libraries, the film, which is a Zee Studios production, has been been shot entirely in Mumbai. “‘Suraj Pe Mangal Bhari’ is a unique family comedy that draws humour from the quirks of its refreshing yet relatable characters. The world is set in the innocence of 1990s when there was no social media or mobile phones,” said Sharma.

About the film, Shariq Patel, CEO, Zee Studios, shared, “It’s a new and unique concept, a mad family comedy with a powerful cast that will definitely entertain the audiences! We are happy to associate with Abhishek as the captain of this ship.”