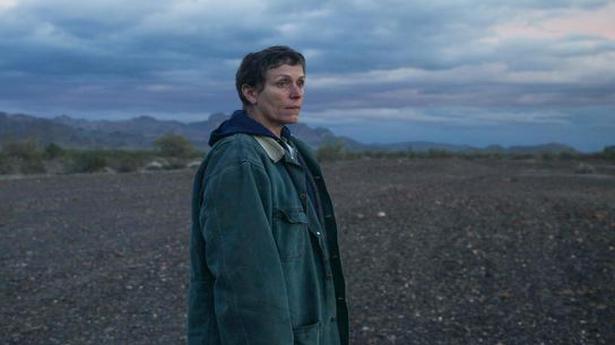 Chloé Zhao and Frances McDormand combine to deliver a stirring commentary on the economy today, that bristles with bravery

Filmmaker Chloé Zhao’s third feature Nomadland is more a visual poem than a film; a piece of art that strikes the balance between documentary and fiction with effusive grace. Zhao is aided, in no small measure, by cinematographer Joshua James Richards’ cathartic shots of the vast American landscape; composer Ludovico Einaudi’s score that bends your heart to its will; and a restrained, moving performance by Frances McDormand (who is also co-producer).

The drama, which first premiered at the Venice Film Festival last year, is inspired by Jessica Bruder’s 2017 nonfiction book, Nomadland: Surviving America in the Twenty-First Century, and follows the lives of a new American tribe: the nomads.

Typically in their 60s, the nomads are essentially van-dwellers, middle-aged and middle-class people whose lives and families were torn apart by the 2007-08 financial crisis, moving from place to place in search of seasonal jobs and identities. From bars and restaurants to campsites and Amazon warehouses, the film paints a poignant picture of the many locales where they find their calling; grey-haired and weary, yet refusing to give up the fight to survive.

Here, McDormand plays Fern, a widow and former substitute teacher from Empire, Nevada, who loses her job after the local gypsum plant in her town shuts down. Unfettered, she moves into her RV (that she christens Vanguard), and joins this sub-culture of sorts, that is led by radical nomadist leader Bob Wells — who appears as himself in the film — along with several other real-life nomads who play versions of themselves. They all converge on a conclave in Quartzite, Arizona where an annual festival/ self-help seminar happens, equipping them with essential skills and tips to adjust to life on the road.

From then on, the film gently navigates Fern through life as she knows it now; without boundaries or responsibilities except the will to stay afloat, meeting a strings of nomads such as herself who are all grieving in one way or the other, some who become friends and most who serve as fleeting chapters (Linda May is fantastic in her appearance here as Fern’s close ally).

But if everything in that narrative sounds thoroughly grim, rest assured, it’s not — Zhao and McDormand combine to encapsulate the spirit of the nomads with devastating grace — as despite challenges aplenty, they revel in their togetherness. Fern’s sister in the film even compares them to American pioneers.

Just like in her 2018 outing The Rider, Zhao pays special, almost loving attention to the connection between human feelings and the nature around them. Fern’s travels take her through some majestic parts of the United States, and with several golden hour shots intertwined with the sweeping score, it’s possible to forget — even if just for a few glorious seconds — the troubles that surround her (and us).

McDormand is absolutely stunning in her portrayal of a woman coming to terms with her journey, unassuming in her stoic demeanour and doing more with a frown than most actors could accomplish with pages of dialogue. Fern may not display the ferocious tenacity that McDormand’s last character did (her Oscar-winning turn as Mildred in Three Billboards) but is no less of a feminist icon and fighter, convincing viewers to question and introspect, while never wallowing in self-pity.

We resonate with Fern’s uncertainty, but still cheer for her sense of adventure, that is captured with compassion and patience. We also wait for the anger to come — about equal opportunity, the economy, the corporations, the government — but it never does, and in a way, perhaps that helps Nomadland accomplish what it aims for with its open-endedness and lack of conflict resolution.

In the past few months, the feature has grown from being a small, well-reviewed indie into a giant Oscar front-runner sweeping top honours during the award season run-in. But all the hype shouldn’t take the focus off what it is: a stark depiction of the times, presented in magnificent fashion by two of the most important women in cinema today.

They’ll see you down the road.

Nomadland is currently running in theatres