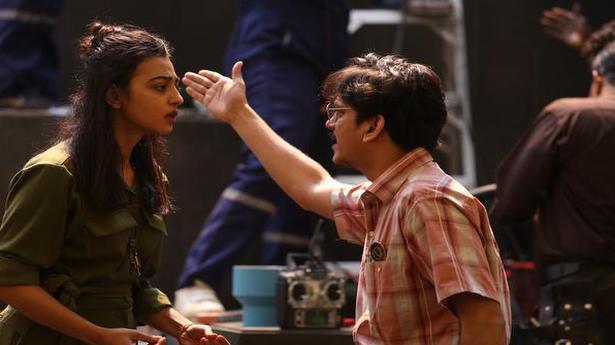 Creators Pooja Shetty, Neil Pagedar and Anand Gandhi have an outrageous premise at hand but somewhere lose control of the show’s ‘sur’

A heated discussion breaks out between cybercrime detective Saajan Kundu (Vijay Varma), a machine-hater and a loner, his once-partner Laxmi Suri (Radhika Apte), also an AI scientist, and their DCP boss, about a potential AI revolution — thanks to an unusual case of an unidentified person run over by a self-driven car — and out of nowhere, we hear the sounds of toilet flushing.

Saajan’s associate, Mona Lisa (an excellent Kani Kusruti), a Malayalee in the predominately Hindi-speaking workforce, joins them — almost apologetically. It’s a banger of a scene and I shrieked in joy. It’s the kind of gag you have a mild suspicion — on whether it would click — until the very end.

Now, the first, logical question that pops out is: who has a washroom next to the workstation? But that is the kind of arid humour that writer-director, Pooja Shetty and Neil Pagedar, draw from their source material. It is absurd, yes, but outrageously funny, oh boy.

Speaking of jokes and how they land, something needs to be said about the primary cast of OK Computer: Vijay Varma, Radhika Apte and Kani Kusruti, and the cocky attitude with which they react and deliver with a straight-face, that amplifies the effect. The first three episodes, especially, is a carnival of well-thought-out deadpan humour. There is a gender-fluid robot messiah, a deadbody named Pav Bhaji, and a nearly-nude Jackie Shroff, leader of a cult that thrives for the safety of homosapiens.

The six-episode series starts with a hook: it’s raat akeli hai and Saajan arrives to investigate an accident case — this time, the perpetrator is an AI-operated car. From thereon, the gags keep coming and you wish they gave a breather. They don’t.

So, when Saajan comes to the crime scene and says, “What am I doing here?”, Mona Lisa, with a poker-face, replies: “Sir, that’s the existential question we have been dealing with for centuries.” Kani Kusruti is an absolute joy to watch and she, in a way, complements Saajan. In fact, she welcomes him like a cutesy air hostess with an “accident main aap ka swagat hai”, and something about “accident” and “swagat” in the same sentence rings a bell. Nevertheless, it’s a scream. Even better comes when a policeman, who is afraid of public-speaking, says he rather prefers to whisper in Saajan’s ears and they nearly kiss! Again, it’s a scream.

The first episode, titled Auto-Pilot, plays out like a parody on investigative thrillers, putting a delightful spin on the tropes that we have accustomed to. Saajan collects pieces of evidence (read: plastic bag) that convince him of the possibility of a murder, orchestrated by a corporate heavyweight, ZIP, while Laxmi calls him out for bias over machines. Their pursuit in finding the murderer is the premise of OK Computer.

There is something ajeeb (strange) in the way humour is written into the series. It never gets worn out even in latter portions, which are the weakest and seem disjointed. In India, you can no longer poke fun at real things. Comedy will no longer be direct, but suggestive. Of course, there are plenty of subtexts and culture commentary in OK Computer but what is truly surprising is how consistently it makes you laugh.

For example, an entire episode is dedicated to a Bot called, well, Ajeeb, a once-celebrated hero among the Indian majority but currently in exile, after switching to an alternate career in stand-up comedy. When they introduce Ajeeb, you see him/her addressing a large gathering and out of the blue, (s)he says, “Vehicle number XX is parked in the middle of the road. Could the owner please take their car,” or something to that effect. It’s a scream. Ajeeb becomes the prime suspect in the case.

Eliciting laughter is one thing, but getting the basics right is another. The creators of OK Computer get the latter right. You could see the effort that went into setting up a proper premise and delivering the punchline. But the main issue is that it gets too ambitious and takes itself too seriously in the succeeding episodes, which doesn’t seem to be its intention at all. The series tries to do too much and in the process, it gets cluttered with interesting ideas, underdeveloped characters and ineffective backstories.

At one point in OK Computer, Saajan says that the problem with his colleague is, “Dimag aur sur donon karab hai.” One could argue that the strength and weakness of the show is both “dimag” and “sur”.

The issue is quite simple: Pooja Shetty and Neil Pagedar have a singular vision but somewhere lose control of the show’s sur. It is what plagues the show from becoming a rare piece of absurdist comedy.