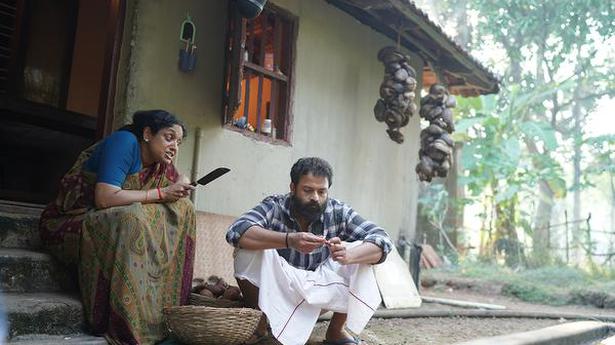 Director Prajesh Sen is as excited as he is nervous about Malayalam film Vellam: The Essential Drink, which releases today in theatres

The director-scriptwriter of Malayalam film Vellam: The Essential Drink, Prajesh Sen is as nervous as if this were his first film. “I have all the anxieties of someone whose first film is releasing. There are the concerns — how will the industry and audiences respond,” he says.

Vijay’s Master, released last week, was the first theatrical release following the lockdown. “It is a Vijay film and has a huge starcast; the turnout was as huge as one would expect of the actor’s.”

Despite offers from OTT platforms, the producers of Vellam chose to wait for theatres to open. The film, in fact, was due for release last Vishu (April, 2020), when lockdown came into effect, and was still under post-production stage.

The wait has been long, Sen agrees, adding, “This is a film that the common man and families should watch. Every Malayali knows such a character,” he says, of the lead character. Inspired by a true story, Vellam is about an alcoholic who loses everything to addiction and gets it all back.

Sen made his directorial debut with Captain (2017), a biopic based on the life of footballer VP Sathyan, former captain of the Indian football team. A penchant for listening to people intently as they tell stories, that feeds his interest in telling. A journalist for more than a decade, Sen is also an author, who has published a few books including the autobiography of former ISRO aerospace scientist and engineer, Nambi Narayanan, Ormakalude Bhramanapadham (Orbit of Memories). After Captain, he had been busy, as co-director, of Rocketry: The Nambi Effect, based on the life of the scientist.

“A friend introduced me to the person, an alcoholic, who inspired Vellam, and told me his story. I found it interesting, I felt here was a character that could make a film. The film is obviously a cinematic telling of his life.” His experience as a journalist, he says, comes in handy during research about his subjects “I may use only 20% of what I have, and file the rest as a sort of document. I cross check every fact and study the person; every character in my films has a background, a story,” Sen says.

This is his second film with Jayasurya. “He gets it when I approach him with something; he understands me. When I told him about the character, he was sceptical initially. ‘A drunkard? It has been done to death. I have done it too. Isn’t it a risk?’ he asked me. I told him that there wouldn’t be a shot of him drinking only the character’s transformation after he consumes alcohol. I introduced him to the character first; the story came after. He green-lit the project and we were on. The film does not have the typical ‘drunk scenes’; real life drunkards are very different from the filmy ones.”

The rapport that Sen shares with Jayasurya helped ease the filming process. So much so that Sen could tell the actor if his ‘metre’ changed, “There were some dialogues which had to be delivered with care. A slight change, and they would sound comic.”

He praises Samyuktha Menon’s work in the film, “This is perhaps the first time that she has done a role like this, a married woman with a school-going daughter.The character undergoes a lot of trauma, being the wife of an alcoholic.”

Vellam introduces 30-odd new actors who were put through a rigorous acting camp. “The film is close to reality, so they had to ‘behave’ more than act or overact. Sync-sound meant everybody had to learn the lines…there was no prompting.”

The stakes are high not only for this film, but also for the entire Malayalam film industry, with the fate of more than 100-odd films hanging in the balance. “Theatres were the last to open after almost all other industries. We understand that people may not be in the mindset to step out or catch a film in cinemas. But the livelihoods of so many have been hit, so a lot of people depend on it,” he says, adding that the show must go on.

Rajkummar Rao’s ‘Gobi Ka Phool’ is the most romantic gesture for...