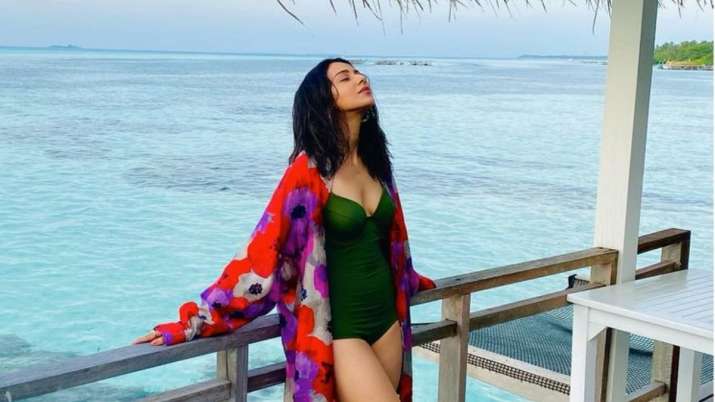 Away from the hustle-bustle of the city, Rakul Preet Singh is enjoying beautiful sunsets and beach vibes in the Maldives with her family. The actress is on vacation before she resumes shoot of her upcoming films and teasing fans with otherworldly photos. classes in a swimsuit ready to take a dip, Rakul shared a picture and wrote, “Smell the sea, feel the sky, let your soul and spirit fly.” She shared another picture with her brother with the magical sunset in the backdrop and said, “Sunset, pool and this fool.”

Well, this is no secret how much of a fitness enthusiast Rakul Preet Singh is. Even though the actress is on a holiday, she is not giving up on her daily dose of exercise. On a beach, Rakul flaunted some killer yoga poses and also shared the picture with her fans. She wrote, “And getting my dose of vitamin D by the sea #nevermissaworkout #vacayvibes.”

In another picture, Rakul is seen in a candid pose on a boat enjoying the sea waves. “Smiles are contagious, be a carrier.. moments captured by daddy the great,” she wrote in the caption.

Recently, Rakul Preet Singh expressed her happiness to come onboard Ajay Devgn and Amitabh Bachchan starrer Mayday. The actress will be seen in the role of a pilot. This is her second film with Ajay after “De De Pyaar De”. “I have worked with Ajay sir in the past and (I am) extremely thrilled to be working with him yet again as his co-pilot in a film where he is not just my co-star but director too,” Rakul said.

“When I decided to be an actor like all the other aspiring actors I had a dream to work with Mr. Bachchan and I am glad that with this film my dream to share screen space with him will come true,” she added. Rakul will begin the shoot of “Mayday” mid-December in Hyderabad.

Can’t express how thrilled iam to be on board ( literally 😝) as a copilot in #MAYDAY . It’s a dream come true to work with @SrBachchan sir . @ajaydevgn thankyouuu and preparing for takeoff ✈️ 💪🏼💪🏼 https://t.co/SLBLVEpTg4

Other than Mayday, Rakul will be seen in a romantic comedy directed by Kaashvie Nair. The film also stars John Abraham, Arjun Kapoor, and Aditi Rao Hydari.

Karisma Kapoor nails her casual look with perfection – Times of...