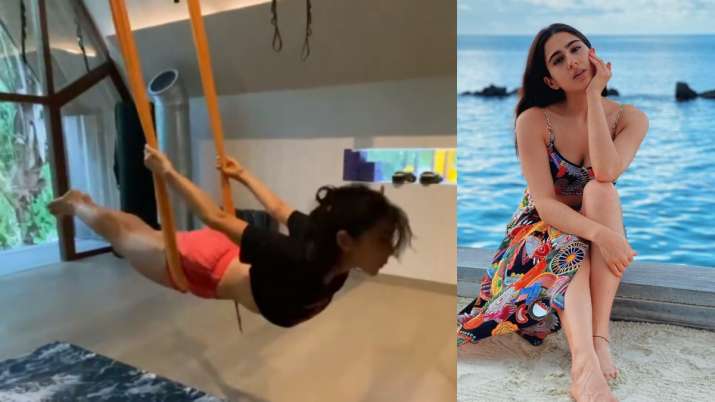 Bollywood actress Sara Ali Khan enjoys fitness and is constant about her fitness routine. In a new video she posted on Friday, the young star aces the aerial yoga. Sara is currently vacationing with her mother Amrita Singh and brother Ibrahim Ali Khan at St Regis Maldives Vommuli Resort. In the Instagram clip, Sara is seen performing aerial yoga with the help of a yoga hammock. She is dressed in a black crop top and orange shorts.

Sara has been sharing her gorgeous pictures from the island. On Tuesday she treated her fans to some of the exotic pictures from the first day of her trip to the Maldives. Sharing a picture from Whale Bar at the St. Regis’, she wrote: “Nights like these Find us a pod- we’re the peas With both of you I want to travel the 7 seas Because as they say the best things come in threes.”

In the pictures, she is seen dressed in a printed multi-coloured bralette which she paired with a matching long skirt with a side slit. The ‘Kedarnath’ actor is seen posing against the backdrop of a serene blue backdrop in the pictures. For the caption, Sara focused on her “sandy toes & Sunkissed nose.”

Sara was recently seen in the digitally released film “Coolie No. 1” along with actor Varun Dhawan. The film was initially slated to open in theatres in May 2020. However, due to the ongoing coronavirus pandemic, it had a Christmas release. On the other hand, she has recently wrapped up a schedule of her next film Atrangi Re. The film also stars Akshay Kumar, Dhanush and Nimrat Kaur. It is directed by filmmaker Aanand L. Rai.

Exclusive! Urvashi Rautela: 2020 was very fulfilling with lots of love...