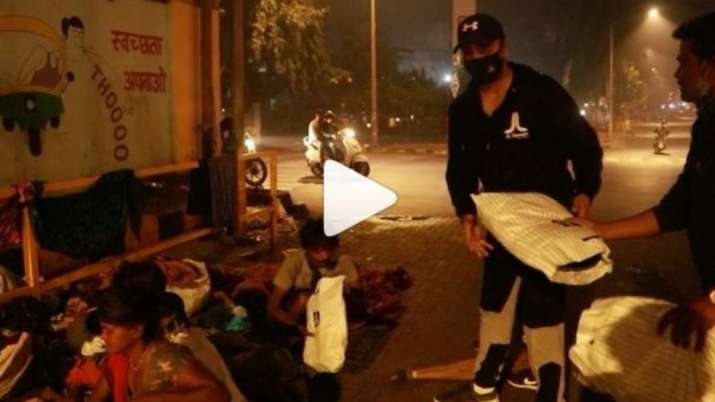 Bollywood diva Shilpa Shetty’s husband Raj Kundra shared a video on social media in which he can be seen taking their son Viaan for on blanket distribution drive. Raj wrote, “One good deed a day.. Values we need to teach our kids. We can’t take things for granted..” The father-son duo roamed the streets of Mumbai and distributed the blankets to the homeless. The duo conducted the drive at 6am in morning. Raj said that it is important to teach your children about the importance of basic necessities.

In the video, Raj can be heard saying, “Good morning, it’s 6 am. Just got my son out of bed. Sometimes, it is important to teach your children that a roof over your head, food on your plate and a nice warm bed with blankets to sleep don’t come easy. You got to see the other side of the world. There are a lot of people sleeping on the streets in this cold winter..”

He added, “We are going to do a deed today. I am teaching my son that good deeds are really important by giving blankets to these poor kids and poor people sleeping on the streets, so let’s do thi.”

Talking about Shilpa Shetty, the actress is all set to make her comeback on the big screen. She recently shared pictures from the sets of her film Hungama 2. The cast including Paresh Rawal, Shilpa Shetty Kundra, Meezaan Jafri and Pranitha Subhash shot for the peppy song with a dash of retro in the city. The cast shot for a song that is said to be a tribute to Helen.

“The song is supposed to represent the fun vibe of the film. With four leads and so many dancers in frame, it was critical to get the entertainment quotient right. But the whole cast has bonded so well and they were so effortlessly in sync,” said a source in the unit.

Other than Hungama 2, Shilpa will also be seen in Nikamma. It also stars Abhimanyu Dassani and Shirley Setia. Shilpa Shetty was last seen on the silver screen in the 2007 films, Life In A… Metro and Apne. Nikamma is produced by Sony Pictures Films India and Sabbir Khan Films.

Armaan Malik curious if social distancing is possible during a concert