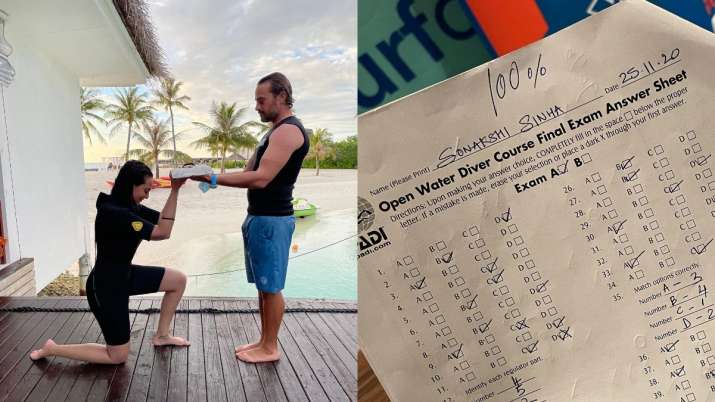 Bollywood actress Sonakshi Sinha on Friday took to her Instagram to announce that she is now a licensed scuba diver and that was something she has been wanting to do for years. She also flaunted her 100 per cent score in the open water diver course test. Recently, the actress jetted off to the Maldives for a short holiday. She shared a series of photos from her vacation.

After becoming the licensed scuba driver Sonakshi shared a few pictures. In one of the pictures, she is knelt down on the deck as she receives the honour of becoming a trainer by her coach and mentor. In another she shared her result of the Open Water Diver Course Final Exam Answer Sheet.

Captioning the post, the ‘Holiday’ star wrote “Knighted by the holy fins! I am now a licensed scuba diver… something i have been wanting to do for years, and finally got down to it! My love for the ocean has just grown ever since my first snorkel experience and this is taking it to a whole new level…”

Further, the actress thanked her ‘super strict’ instructor, saying “Thank [email protected] for giving me my super strict and super cool instructor Mohammed, i couldnt have asked for a better teacher(i mean this is the first time I’ve scored a 100% in ANY exam )! And thanks @[email protected] (the post certification photographer) for making it happen!!! #scubasona #openwaterdiver.”

Meanwhile, on the work front, she will next be seen in “Bhuj: The Pride Of India”. The war action film also stars Ajay Devgn, Sanjay Dutt, Ammy Virk, Nora Fatehi and Sharad Kelkar. It is set during the Indo-Pak war of 1971.

SC notice to Centre, others on plea against web series ‘Mirzapur’

SC notice to Centre, others on plea against web series ‘Mirzapur’