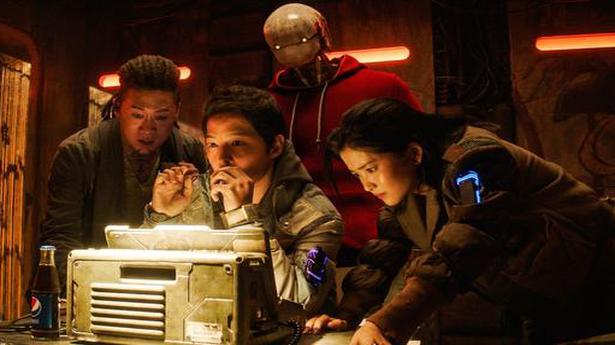 The much-hyped Korean space opera film, which had a direct Netflix release is, atleast visually, a fantastic spectacle

Fifteen minutes into the film, it’s tough not to think of what the big-screen viewing experience would have been like for Space Sweepers. The much-hyped Korean space opera film which had a direct Netflix release is, atleast visually, a fantastic spectacle. The CGI is consistently top-notch, and the cinematography is excellent.

Set in the year 2092, the film follows a rag-tag group called the Space Sweepers. Tae-Ho (Song Joong-Ki), Captain Jang (Kim Tae-Ri), Tiger Park (Jin Sun-kyu) and the reprogrammed military robot Bubs make their living off salvaging space debris. It’s a dystopian future where the earth is dying and a giant corporation, UTS headed by James Sullivan (Richard Armitage) has built an orbiting home. But only an elite few have a free pass whereas the rest, like our main crew, have a tough life. Despite a seemingly cool space gig, they’re neck-deep in debt, and Tae-Ho doesn’t even have money for a pair of shoes!

What the film could have greatly benefited from is a stronger storyline that didn’t take the predictable route. The lives of the motley space crew change when they find Dorothy, a rather adorable seven-year-old humanoid robot. She follows them around, draws squiggly pictures of them and much time is devoted to how she thaws at their hearts.

However, there are cliches abound henceforth, as the crew make a few unpleasant discoveries and are forced to go on the run (some well-choreographed action blocks make their presence felt here) while gun-toting space robots terrify them are aplenty. Of course, there are the inevitable comparisons to Guardians of the Galaxy or Star Wars that come with the film’s genre.

Despite these shortcomings, the film manages to remain largely entertaining. The cast greatly helps with this, as Song Joong-Ki is good and Kim Tae-Ri particularly shines in her role as the no-nonsense Captain Jang; it would have been great to see more of her.

While the viewers are given small back-stories to the characters, it feels rather rushed. Armitage as James Sullivan is seemingly menacing, but also is saddled with the hammy one-liners.

The theme and the environment that Space Sweepers is set in had great potential, but the film remains content with its largely simplistic storyline. Within these confines however, we get an entertaining two-odd hours; the Indian equivalent of a fun, masala entertainer.