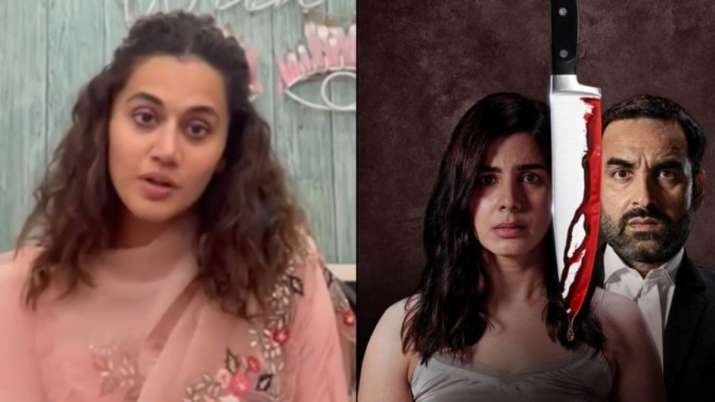 Bollywood actress Taapsee Pannu who has previously voiced upon many issues faced by women, recently watched the show ‘Criminal Justice: Behind Closed Doors’ and shared her opinion on the topic. Since its release last week, Hotstar Specials show has been lauded by audiences and critics alike for its sensitive portrayal of critical issues faced by numerous women. Starring Pankaj Tripathi, Anupriya Goenka, and Kirti Kulhari the show sheds light on the grim reality of marital rape and abuse; and what really goes on behind closed doors.

The ‘Thappad’ actor once again raises concern over the alarming rise in issues surrounding women. “Whether you are married or not, consent is paramount,” says Taapsee Pannu after watching Criminal Justice.

Taapsee said “Criminal Justice: Behind Closed Doors portrays the grim reality faced by a lot of women in our country. It has addressed a topic shunned for far too long, that of marital rape. The show addresses the issue quite sensitively and intelligently and it has come at a time when we have seen an alarming rise in the domestic abuse cases faced by women in lockdown. I firmly believe that No means No; whether you are married or not – consent is paramount.”

“I hope that this show builds confidence in women so they can speak against such acts of crime, and not keep quiet because of societal pressures. Pankaj Tripathi, Kirti Kulhari and Anupriya Goenka have delivered an exceptional performance in Criminal Justice: Behind Closed Doors; I urge you to go and watch the show right now,” the actress said.

Talking to her Instagram, Taapsee posted the video and wrote “NO means NO, Shaadi ke baad bhi! What a powerful show #CriminalJustice! Kudos @pankajtripathi @iamkirtikulhari, loved watching it !”

Meanwhile, Criminal Justice, is the story of Anuradha Chandra (Kirti Kulhari) who has confessed to stabbing her husband Bikram (Jisshu Sengupta). What initially appears to be an open-and-shut case, lawyers Madhav Mishra (Pankaj Tripathi) and Nikhat Hussain (Anupriya Goenka) believe there is more than what meets the eye. As the story unfolds, the issue of marital abuse and marital rape comes to the fore, provoking many to think about the importance of consent.

The 8-part courtroom drama series has been directed by Bollywood’s Rohan Sippy, Arjun Mukerjee and written by Apurva Asrani; and is now available in 7 languages on Disney+ Hotstar VIP.

Mira Rajput shares a mushy photo with the ‘love of her...