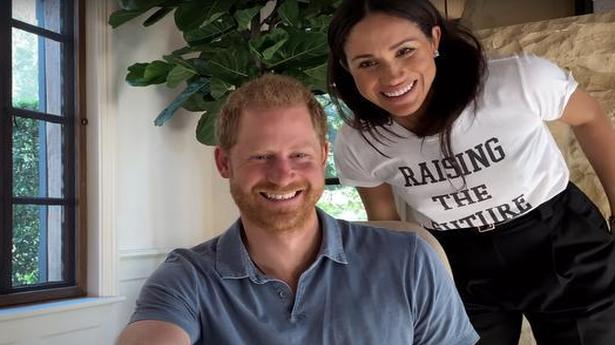 The Apple TV+ docu-series, featuring both celebrities and ordinary people, is compromised by the jarring nature of its narrative, but is still a credible attempt

“For all my life, I have felt worried, concerned, a little bit tense whenever I fly back to the U.K.,” recounts Prince Harry animatedly on camera. “London is a trigger, unfortunately, for what happened to my mum,” he adds, delving into the trauma he suffered after losing her (Princess Diana) to a car crash, nine days before his 13th birthday.

His story of tragic bereavement and the biting sorrow stemming from it is well-known, but droves of regular individuals who go through unspeakable psychological distress daily are seldom the centre of media attention.

Also read | Get ‘First Day First Show’, our weekly newsletter from the world of cinema, in your inbox. You can subscribe for free here

Apple TV’s latest docu-series The Me You Can’t See seems to be an earnest attempt at reversing this trend by juxtaposing the stories of regular people and celebrities alike — grappling with issues of mental health.

Hosted by Oprah Winfrey and the Duke of Essex himself, the documentary goes beyond the nitty-gritty of clinical psychology to unabashedly explore the lack of awareness and the knowledge gap that exists in dealing with individuals suffering from gruesome mental ailments.

Separately, the show disseminates information on various mental illnesses like Obsessive-Compulsive Disorder (OCD) and schizophrenia, documents the everyday struggles of individuals battling these afflictions with much elan.

From the tragic happenings in the life of Lady Gaga to a first-generation Asian American combating depression, the show zeroes in on the commonalities in their experiences, to paint a holistic image of what it is like to struggle with an invisible adversary, contained within one’s psyche.

Lady Gaga speaking on the show

The Apple TV+ series couldn’t have chosen a more auspicious moment to air, coinciding with the time of the year observed as Mental Health Awareness Month in the U.S.

However, something remains amiss. The jarring nature of its narrative, skipping from one person’s story to another, not allotting enough attention to each, is the production’s Achilles’ heel.

This is somewhat compensated by the probing nature of the production, taking nothing at face value, doing so in an aesthetically-pleasing manner.

Take, for instance, its exploration of Robin William’s suicide in 2014 by making use of testimonies from his son Zachary. As William’s history of drug abuse is laid bare, his son recounts how he connected with the late comedian on the account that they both took to substance abuse just to get through the day. The wide range of emotions that both of them experienced while tackling the inadequacies in their lives is brought to life vividly, without indulging in unnecessary melodrama, to the show’s credit.

Providing more credibility to the production is the show’s attempts at understanding the varied nature of mental health issues gripping individuals from different walks of life. Not only do we get to hear from NBA star Demar DeRozan on how he stood up to his inner demons, but viewers are also offered a sneak-peek into showbiz favourite Oprah Winfrey’s struggles against white America and the psychological repercussions she’s faced.

However, the most important of its queries pertain to the mental health of professionals, in charge of providing relief to people experiencing extreme anguish. In the first three episodes made available via screeners, the story of Dr. Essam Daod, a child psychiatrist working with kids of Syrian refugees in Greece, stands out.

While Dr. Daod seems unfazed by the pre-pubescent Fawzi as he pours over sordid details of how he saw his family members die in the ongoing civil war in Syria, we soon discover that it is not the case.

While embarking on a new day of work, the psychiatrist breaks down inconsolably in front of his colleague. As he tries to control his incessant sobs, he ponders whether they should stop their work indefinitely to which his colleague replies: “ If we don’t do this work, who else is going to?”

Such moments of genuine introspection into the world of unhinged tragedy is interspersed by Prince Harry undertaking peculiar mental health exercises, which might come off as silly — but the central message of the entire endeavour is loud and clear — and one might choose to ignore the same at their own risk.