‘The World to Come’ movie review: Not as evocative as ‘Portrait of a Lady on Fire’ and that could well be its strength
Advertisement

Mini Mathur not to make a comeback on Indian Idol, says “can’t handle a toddler again”

Norweigian filmmaker Mona Fastvold’s doomed love affair is soft, gentle and plays out like an audio-visual book of a person rummaging through memories and the sadness that comes with it

Apologies if the headline sounds misleading or comes across belittling Mona Fastvold’s ambitious efforts to remain grounded and faithful to the original source material, based on Jim Shepard’s novel of the same name. A screenplay by Ron Hansen and Jim Shepard, The World to Come bears no semblance to its French counterpart, Céline Sciamma’s Portrait of a Lady on Fire, except that both are period pieces centred around a doomed love affair and are shouldered by two female characters rubbing off heat that could turn into a wildfire, as they quietly peer into each other’s eyes taking comfort in their existence.

It is actually silly to even mention Fastvold’s film with Portrait… in the same breath, although it is true that the primary characters of two films are distant cousins with a common heart, for, The World to Come might be a good companion piece to Portrait… If such a parallel were to be drawn, the ideal title to The World to Come would be: Portrait of Two Ladies Sharing Heat, in the winter of 1856 in Schoharie County, where they become acquainted as neighbours.

Let us cut to the chase: there has never been a more recent great example of a film adaptation, whose literary weight casts a looming presence in everyday conversations, exhibiting the characters to communicate in strong literary verses, in a non-flowery garb without making the narration sound like a cesspool of pretence. There is a thin line that separates dialogues from natural conversations, but there is something austere about Fastvold’s idea of day-to-day conversations that can hardly be classified as “dialogues”. It is another thing that The World to Come looks like it was meant to be bathed in a rich piece of literature.

Perhaps that answers Fastvold’s decision to go-ahead with a first-person narrative, which brings about a certain softness and timbre to the original text at hand. Plus, it is a single person’s account of a courtship (though they would prefer the word ‘friendship’) that blossomed and doomed in a span of seasons, spread across six months. And there is something ‘soft’ and ‘gentle’ about the “voice” of the narrator (Katherine Waterston who plays Abigail), giving life and meaning to words and taking the necessary pauses for emotions to fill the gap. For, the only way to look at The World to Come is to treat the film like an intimate look into a deeply personal journal, filled with grief and dried tears, as you make up your mind to discover the person behind their “voice” in fragments. 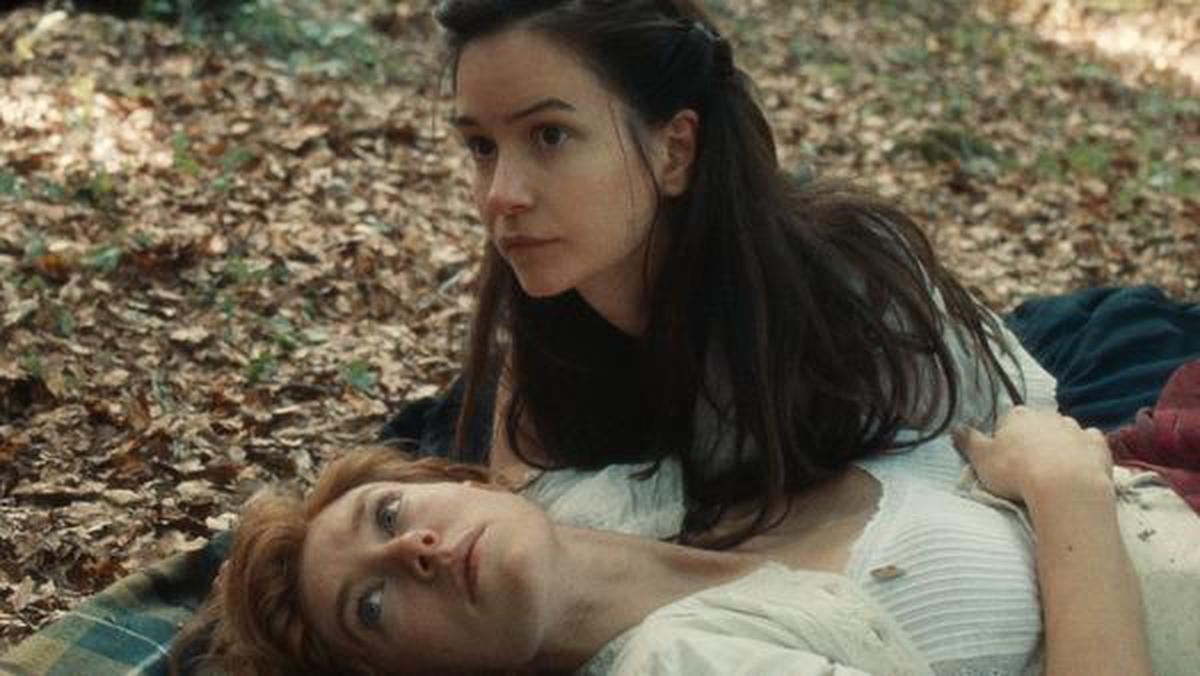 A still from ‘The World to Come’

You marvel at Fastvold’s world-building and how she establishes the characters’ dynamics in a single, powerful piece of line. “This morning, ice in our bedroom for the first time all winter,” reads Abigail, possibly hinting at the cold relation she shares with her husband, Dyer (Casey Affleck), who owns a farm. Grief and sadness entangle the couple as they grieve over their daughter, who died of diphtheria. “Contentment was a friend he never gets to see,” describes Abigail of her husband and you marvel yet again of Fastvold’s choice of verses.

Sure, the film’s soaked in familiarity: a lonely wife in an unhappy marriage with a husband who doesn’t even look at her suffering and there’s the mounting grief of loss. “I have become my grief. What calm I enjoy does not derive from the notion of a better world to come,” says Abigail and you almost sympathise with her, as her eyes go searching for a woman on the wagon. How appropriate, you wonder, for it is this woman’s entry into Abigail’s life, is the world to come.

The World to Come

Abigail naturally seeks out a friendship with Tallie (Vanessa Kirby), who moves in with her husband Finney (Christopher Abbott) in the nearby farm. She learns that Tallie too, has been trying to birth a child with her husband, and they come across as two ladies blowing off steam about their respective unavailable partners. But you sense it’s a marking of something deeper just by the way they exchange looks. And then comes this beautiful, beautiful piece of poetry.

In the winter Sun through the window, her skin had an underflush of rose and violet which so disconcerted me that I had to look away.

As always, when it came to speaking and attempting to engage another’s affections, circumstances doomed me to striving and anxiety.

Unlike Abigail, a writer troubled by the prosaic of her repressed feelings and seemingly taking comfort in them, Tallie is more fluid — at least on the surface. There’s a stillness in the romance that they share that plays to the film’s advantage. It is this stillness that is both a ballad and musical notes that define The World to Come, although it is hard to put them into words and we would suggest to go by Abigail’s: “I find that everything I wish to tell her loses its eloquence in her presence.”

Everything about the film is ‘soft’, as if Fastvold wanted the audience to feel as opposed to process what’s unfolding. In one way, The World to Come plays out like an audio-visual book of a person rummaging through memories and the sadness that comes with it. Even the music (by Daniel Blumberg) brings a lightness and provides warmth to Abigail and Tallie in the absence of their physical warmth. Though a period drama, there is a painterly quality to Andre Chemetoff’s frames and are brushed with oil paint, that make the characters lively, yes, but also make the experience akin to marvelling at a 19th century painting at a museum. What images don’t explicitly tell, Abigail’s verses do. Here’s another favourite:

By turning the lens piece I could draw her face nearer and hold it there until she turned away.

Her image provoked a sensation in me like the violence that sends a floating branch far out over a waterfall’s precipice before it plummets.

Katherine Waterston leaves an affecting performance as the soft-spoken Abigail who has a quietness around her that does wonders to the otherwise quiet film. Vanessa Kirby, on her part, is chirpy and tries to be whatever Abigail isn’t. Casey Affleck serves as one of the producers on the film and it shouldn’t be a surprise that the actor has reserved probably the best character for him. He plays Dyer who has all the insecurities of a man who discovers his wife’s feelings for another woman. There’s a scene where he takes it all out on her — but with words. Yet, Dyer is empathetic about her feelings and doesn’t let the insecurities come in the way of his relationship with Abigail. It appears that Dyer seems to have been written to serve as a counterpoint to Finney, the intrusive and jealous man of Tallie. Now that we have established the fact that Dyer is marginally better as a husband compared to the brutish Finney, the film’s great moment arises in the form of self-doubt of a man — in this case, it’s Dyer’s.

“I have always thought I would bring misfortune to people I loved,” says Dyer, looking at his wife in the film’s closing portion. It gets even better when he says, “Aren’t you going to answer that.” Just for this scene, you cannot help but feel sorry for Dyer, which, perhaps, is the only time you get inside his head.

These are all the merits, one feels cheated when Fastvold reserves an important piece of information regarding Abigail and Tallie’s physical intimacy till the end, especially in the manner in which the scenes are cut swiftly. “What’s to become of the thousands of our sex,” asks Abigail in one of letters she writes to Tallie, when she’s taken away from her. While the lack of sex scenes may be a bummer for a film that thrives to explore female sexuality, it appears that Fastvold’s reluctance to show sex comes from a place of respect and is not overwhelmed by the weight of the novel or Portrait of a Lady on Fire.

There is an absolutely fantastic shot that freezes on Abigail as she lay on the table stretching her arms and legs wide open, as if she were on the cross of ecstasy (scroll up to see the lead image), right after she kisses Tallie for the first time. That’s the image that is bound to stay.

The World to Come was the opening film at the ongoing International Film Festival Rotterdam 2021.

‘The Family Man 2’ review: A lengthy but befitting follow-up