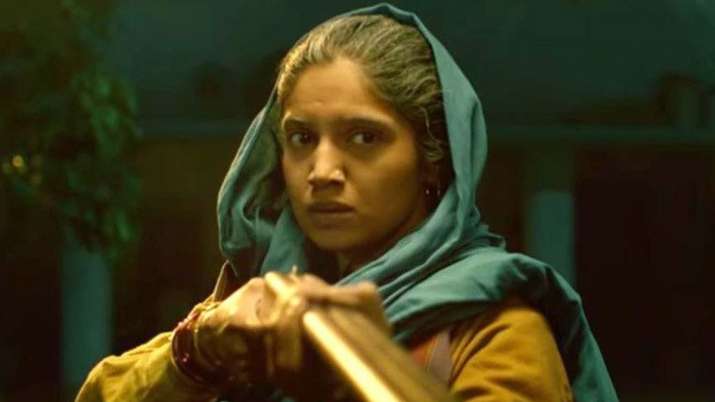 It was not at all easy for Bhumi Pednekar to play the role of older woman in the film, Saand Ki Aankh.

Directed by Tushar Hiranandani, “Saand Ki Aankh”, which was released in 2019, and was based on the lives of India’s oldest sharpshooters, Prakashi Tomar and Chandro Tomar.

Bhumi played the role of Chandro Tomar, the oldest sharp shooter in India, who along with her sister (played by Taapsee Pannu) has won laurels for India.

Recalling the challenges faced to play the role, Bhumi said: “I think SKA, in terms of difficulty where the physical work was concerned, was quite high because the make-up was specialized and that was honestly very tough to be in. Through that experience the make-up was so harsh on the skin to a point that I had actually burnt my skin and I had very major allergic reaction.

“Cracking the body language and playing a character which is way older is always a challenge too. So, I think physically it was a lot tougher than all my films.”

Bhumi feels great to be a part of such progressive and important content.

“I don’t know if my cinema is off-beat. I definitely feel the definition of main stream cinema has changed tremendously over the last 5 years where my films have contributed towards that change. I’m really happy about this because that’s what artistes are meant to do,” she shared.

“So many fantastic actors before me have done a tremendous job to pave the way for this change too but there is a certain momentum that the so-called unconventional cinema has caught onto which hasn’t happened in such frequency earlier.

“I feel these days the audiences are looking for work which is entertaining along with high content and I think my films kind of give that. So, I have managed to create a space for that and myself and I thank GOD for that,” she added.

Bhumi now is gearing up for the release of “Durgavati”.