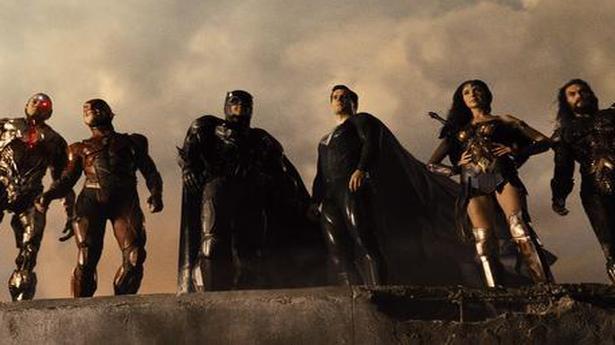 Snyder pours his heart and soul into making the indulgent movie of his dreams, that gives the fans exactly what they wanted

How many directors get their name stuck in front of the movie title? Even in the final cut of say Apocalypse Now or Blade Runner, one doesn’t call it Francis Ford Coppola’s Apocalypse Now or Ridley Scott’s Blade Runner. Never mind. So is it worth spending four hours of your life watching Batman get an A-team together to deflect the end of the world… one more time? Well the answer to that depends on the kind of person you are. If you feel that 2017’s Justice League, which was completed by Joss Whedon, after a family tragedy caused Snyder to step down, told the tale adequately, then maybe you are not the target audience for this movie.

If, however you felt Whedon’s cut changed the tone, making bright and MCU jokey, and left a lot of things unsaid, and/or if you were part of the campaign for The Snyder Cut, then four hours is not enough time to tell the tale, with all the back and side stories.

So Superman (Henry Cavill) is dead and Batman (Ben Affleck) is feeling terrible about it. There is an ancient, wicked being, Darkseid (Ray Porter), who has been destroying worlds since the beginning of time—seems an awfully lonely job description. There are three boxes of immense power—the Mother boxes (very Jungian!) that Darkseid plans to use to destroy the earth. He is defeated millennia ago when the Olympian gods, Atlanteans, Amazons, humans and a Green Lantern unite. The boxes are separated and hidden by the Atlanteans, Amazons and humans.

Darkseid sends his skivvy Steppenwolf (Ciarán Hinds) to find the boxes, unite them and destroy the world once and for all before moving on. Batman realises the only way to defeat Steppenwolf (can only think of ‘Born to be Wild’) and Darkseid is by getting a team of people with very special skills. He and his first recruit, Wonder Woman (Gal Gadot) go about getting Cyborg (Ray Fisher), Aquaman (Jason Momoa) and the Flash (Ezra Miller) to join.

The team is formed and they are almost ready to take on the naughty planet-destroying creatures, when they realise there is a chance to get the Supe back (time for the messiah complex). There have been comments of approaching the film like a mini-series that you could binge watch, and Snyder has helpfully put in chapters.

Willem Dafoe’s character as Aquaman’s mentor is sympathetic and Jeremy Irons makes for a nice, canny Alfred, who is as comfortable making the perfect cup of tea as he is powering the night crawler. Gadot is so lovely as Wonder Woman, one is almost (not quite) willing to forgive pouring her into all those fetishized clothing. Also are WW and the Bat a thing — they did accidentally brush fingers? Affleck is growly and angsty as Batman while Cavill is stangely sneer-y as Superman (must have something to do with his distracting upper lip, where his Mission Impossible: Fallout moustache had been digitally removed).

Salman Khan’s Tiger 3 To Clash With Ajay Devgn’s MayDay And...